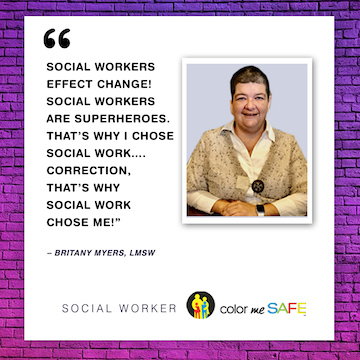 Social Work found me!  I didn’t look for Social Work, it was in me.  I actually tried to “run” from being a Social Worker.  Having a childhood interrupted by Social Workers from child-welfare on multiple occasions; I was not inspired.  What I saw was grumpy old people with pens, note pads and lots of questions and not one smile.  I didn’t want to grow up to be like that.  I dreamed of being a teacher, then a counselor/therapist or maybe clergy, but never a Social Worker.  While working on a degree in psychology, a friend of mine said, “I think you’d make a good Social Worker.”  I aggressively shook my head and told her “no way!”  She encouraged me to “check it out” and told me of an interest meeting that would be held later in the month.  I went to the meeting ready to prove to her that I was not Social Work material.  Upon leaving the meeting I thought, “Well, it’s not so far off from psychology.  I’ll take the intro class to see what it’s all about… it’ll at least be an elective.”

That fall semester I sat down in my first class of the year, Intro to Social Work.  I sat and listened to the history of Social Work, beginning back as far as human kind.  We, as a species, develop a magnitude of altruism over our lives inspiring us to help those around us.  In the early 19th century as industrialism tightened its grip, societies were noticing the impact it was having on children, women, families, humanity – from this Children’s Aid Societies, Settlement Houses and other public relief, Social Work was born.  As I sat in that first class I realized I was gorging myself on this information- it spoke to my soul.

I often share the experience I had in that class, mine alone.  Sitting in my desk in that classroom hanging on every word of the professor I saw the vision of a jigsaw puzzle with a few pieces still missing.  In the place of one of the missing pieces was a puzzle piece, but it was turned the wrong way and did not fit.  In the moment I saw that piece turn up and snap into its proper place and instantly felt at peace.  I interpreted that then and now as I was on the right path, but had not found my right place… until that moment.  I WAS/AM to be a Social Worker!  In that moment it was clear and I haven’t turned away since.

Since that pivotal moment in that wonderful class, I have received my Bachelors, Masters and license in Social Work.  I have worked in child-welfare, domestic violence, the public school system and advocacy.  I have never once felt like I should have been someone else or done something else.  I have often told other Social Work students, “If you don’t feel it, don’t do it.  When you feel it no hurdle will be too high!”  As once was advertised by the Peace Corps, “It’s the hardest job you’ll ever love!”

The one thing I love most about being a Social Worker is that no two days are EVER the same.  Our society is changing by the moment.  Things identified as “no big deal” yesterday are being exposed for the damage caused today.  From Selma to BLM, from the war on terrorism to domestic terrorism, from women’s right to vote to the #MeToo movement… or lives seem to be on hair pin curves daily.  Each of these and the many, many more that are out there have emotional, familial and social consequences.  Social Workers touch each level of that trauma.  Social Workers are as diverse as our communities.  Social Workers reach into each level of society – from one-on-one counseling to working with families and schools to being in Austin or DC explaining the plight of our communities to legislators to have policies and laws changed or enacted.  Social Workers Effect Change! Social Workers ARE SuperHeroesSheroes! That’s why I chose Social Work. Correction… that’s why Social Work chose me!