Keeping the Magic in Our Children 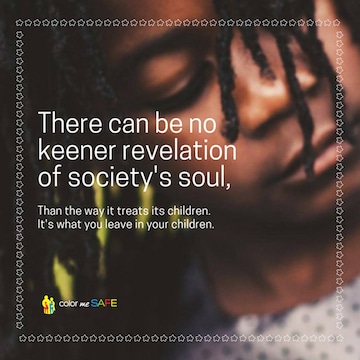 I’m at that awkward phase of life where I am a half adult and half kid, also known as a teenager. Honestly, it isn’t all that bad, probably because compared to others, I have been fortunate enough to keep a large amount of that “child-like wonder” sealed in my heart. However, I fear that when I grow up, I will lose that special, carefree joy that keeps me going each day. I fear that the wonder that allows me to dream and believe in impossible things will disappear when hit with the harshness of the real world. When I look around, I see many adults unsatisfied with themselves. They are on a constant search for their youth, something that many adults now simply see as a memory. I can understand why some adults yearn for their youth; for them, childhood was the best part of their life. The unforgettable memories, the comfort of a loving home, being allowed to act and feel emotions without restrictions, and being sheltered from the harsh world we see as our reality. These are all things that no one would ever want to forget — things that remind us of the happy person we used to be. So, of course, childhood is undoubtedly one of the most beautiful times of our lives… something that people want to keep holding onto. That is, if you were lucky enough to be given such a wonderful childhood.

The sad truth is that the childhood many adults long for is not one that everyone gets to experience. It is almost unthinkable, dare I say despicable, that an adult might try to rob a child of the happiness and innocence that the child has in them. But, isn’t that what happens in the real world? Child abuse, domestic violence, sexual assaults… these are some of the most inhumane, heinous acts that can be committed towards someone — let alone a child. The trauma and fear that some children experience because they are locked away in a home that they can’t escape from doesn’t just harm them — it harms our society as a whole. People want a world in which crime and hate don’t exist, but people often times overlook the fact that nothing in this world can or will ever be able to change if the younger generation is not protected. How could we ever imagine a diplomatic world in which people of different genders and races cooperate, if there are children who are being abused by their own family? Personally, I think that protection and education for the younger generation should be a priority for everyone. Children who are victims of abuse aren’t just physically affected. Their mentality, outlook on life, trust in others, even themselves — all of this is stunted. They psychologically aren’t able to grow and become the best versions of themselves, not to mention that they would have a past filled with scars. A past that they would have to carry with them for the rest of their lives.

Young children naturally trust their loved ones. They expect adults to look out for them, care for them, and have their best interests at heart. So, a child might not speak out and get help if they are being abused, because there is the possibility that the abuser is someone the child knows. Someone the child trusts. Children are so innocent and pure; if they have an emotional connection with someone, they wouldn’t want to betray that person’s trust. In fact, lots of victims of child abuse remain silent to protect a parent who is non abusive. Abusers can even manipulate a child’s trust to keep them silent! As a result, sometimes it can be extremely difficult to figure out whether a child is being abused or not, but it is well worth the effort!

You know what is worse? That many people ignore families they know, who are going through such difficult situations for the fear that they or the family might face heavy repercussions. In that case, does that make those people any better than the abuser? They are simply bystanders that witness injustice and allow it to happen. No matter how small of an issue it seems, it should be reported, for the benefit of the child. For example, take a look at our current COVID-19 situation. Before quarantine, children of abuse could at least use school as an escape from their home, but now, where are they going to go? They are locked at home, possibly with the abuser! It is more important now than ever before that people who are aware of cases of abuse report them immediately. It is for the sake of a child! It isn’t something that should be taken lightly.

Another reason that some children might not speak out against their abuser is the fear that they might be looked down upon by others. Abuse towards a child is never the child’s fault, so the fact that a child would rather hide than let others know that he/she is being harmed says a lot about how our society operates in general. More specifically, people who are aware of child abuse, but choose to ignore it are a big part of this problem. They give children the impression that the consequences of child abuse is something that should be avoided at all costs, which isn’t true.

Every case of child abuse is different, but there are so many services and so many people who are willing to help soothe the pain that the victims of child abuse feel. Proper child protection is something I personally wish our society placed a heavier emphasis on. As someone who is part adult and part child (aka a teen), I can say with 100% confidence that I would be devastated if I ever lost my child-like wonder. So, the fact that there are some children who will never be able to experience a happy childhood; and may not even get the opportunity to find and retain their inner wonder is terrible. Hopefully, we as a society can grow to value and prioritize child protection above all. Hopefully, we can protect the small bit of magic that is left in this world. Magic that can only be found in children.